One of Scotland’s premier tourist attractions is setting fire to Scotland, and that’s causing a problem for deer. The Jacobite steam train sets fire to the hillside, Scottish Natural Heritage officers look at the burnt hillsides and conclude there is not enough habitat for deer. Niall explains what can be done. Plus he’s having to […]

Roy Lupton is hunting down the foxes that are feasting on lambs. He is armed with thermal and lamp, and on patrol around a farm in the South-East of England. Roy uses a Foxpro caller and Silva Fox mouth call, Pulsar thermal scope and Pulsar thermal spotter Click here for all of Roy’s films on […]

What’s the deer’s biggest enemy in the Highlands of Scotland? Man? Wolves? No – it’s the steam engine. In the first in his new series, A Year in the Life of Highland Sport, deer manager Niall Rowantree explains why the ‘Jacobite’ steam train is driving out deer from the Highlands and what can be done […]

RSPB hits out at gamekeepers

The RSPB is upping its campaign against grousemoors, moorland gamekeepers and grouseshooters. The conservation work that gamekeepers undertake across the UK is the only barrier to the RSPB’s goal of being the UK’s one-stop-shop for birds, Many gamekeepers believe the bird rights and welfare organisation is piling on pressure to try to bring down their […]

Londoners are to be introduced to the joys of ratting via an exhibition. Tiny the Wonder, a champion rat-catching dog in the 19th century, is now to be told in an immersive show at the Museum of London. The Manchester terrier was once celebrated in the City of London for being able to kill 200 […]

End of the line for invasive goldfish

A pond in Nottinghamshire has been drained because of the threat posed by goldfish. The goldfish bred and multiplied over the years, after being dumped into the water as unwanted pets, and they started out-competing local wildlife for food and living space. The pond was drained and the fish – promises the company doing the […]

Did buzzard eat shot or was it shot?

Anti grouse-shooters have been whipping up anger in North Yorkshire over a dead buzzard. They shared this X-ray showing metal particles in the buzzard, and gained the support of North Yorkshire Police. UK shooting organisation BASC has asked the police to confirm whether the buzzard was shot or if the metal is ingested shot passing […]

New eagles for Isle of Wight 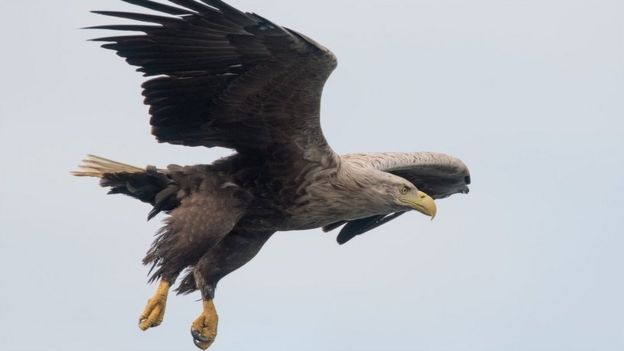 Natural England has issued a licence to allow the release of 60 white-tailed eagles on the Isle of Wight. It claims it ‘paid attention’ to impacts on other wildlife and livestock and it ‘carefully examined’ the potential risk of lamb predation.