A conservation group claims that the Spanish government plans to slaughter 5,000 red deer in a national park.

Robbie Kroger of Blood Origins says a ban on hunting in Spain’s national parks, introduced in December 2020, has led to chaos. He says: “The Spanish government, through various means – through various advocacy situations from people that do not think that hunting is a viable wildlife management tool – put in place legislation that resulted in the banning of hunting in national parks. Now, a national park in the Spanish sense of the term is a park similar to Yellowstone in the United States, and that it is governed by the state. The state in this case being Spain, the country of Spain. Unlike Yellowstone in Spain, the national park designation is an area on a map in which you can encompass private land. That private land is subject to the regulations of the national park. It gets stripped of essentially the rights owners – of what you get from owning your own land.”

Robbie says that there is now no hunting on private land areas within national park boundaries. He says that this has caused an explosion in the numbers of deer and wild boar. These animals are damaging habitat.

Robbie says: “We all said, as hunters and as the outfitters community, when the ban was coming down, that a couple of things are going to happen. Number one: wildlife populations are going to go up.

“These guys do a phenomenal job of habitat restoration, habitat maintenance, sustaining the habitat so that you can grow really good wildlife. When the habitat is good, wildlife is going to flourish. So, you have got a ton of red stags on the landscape. Now you have a ton of wild boar.

“It doesn’t seem like a lot of time. It’s only been a year. But if you think you’ve got a maximum sustained population coming into the ban, you’re going to have a significant surplus. If you don’t hunt, that’s what happens. A significant surplus causes a lot of degradation of the habitat in the landscape.” 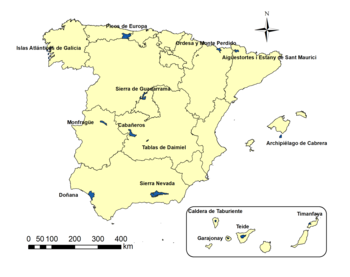 Map showing the distribution of the national parks in Spain (source: Wikipedia)

The ban on hunting has also led to financial losses for locals who can’t shoot. Robbie says: “If you can’t hunt on your private property, you don’t have revenue coming in. You also don’t have the opportunity to pump economic revenues into the community. So, hoteliers and butchers and bakers and all the things that come along side hunting.”

Realising that wildlife populations were getting out of control, the Spanish government asked shooters to cull 5,000 deer in the Cabaneros National Park during February. Shooters refused as the new rules prevented them from selling what they shot. The government refused to finance the cull. “It can’t go ahead until it’s agreed who will pay for the project,” says Robbie.

That level of culling would have been disastrous. Robbie says: “You can imagine what that would do to the landscape from a tranquility perspective to a wildlife impact perspective. To shoot that many animals in that period of time. And it’s almost ironic that the Spanish government says do not hunt and now we need to hunt now.

Robbie says that not culling is disastrous, too. The animals are damaging the vegetation. He says: “Boars and stags need vegetation to survive. Boars are tearing up the landscape, rooting around. It’s almost like an elephant, in that if you grow populations of elephants, they’re going to modify their habitat to a point where they destroy it. It’s the same thing with any wildlife species population that gets out of control.”

Robbie says landowners feel helpless. They want the old rules restored, which would allow them to take control of the landscapes that many of them own. He says: “They know what the solution is, what they need to do. But the Spanish government, unfortunately, has handcuffed them to not being able to hunt, not being able to generate economic revenue, and not being able to put food into the larder of the community.

“All the venison and wild boar are eaten in Spain. They’re not left on the landscape.”

Robbie says hunters are frustrated. Although they own the land, it is part of the national park system. He says: “In Spain it’s a crazy system. As with any ecological system, something’s going to break. Mother Nature’s a boom-and-bust girl. And so you’ve got to understand that a population cannot increase forever. Something’s got to give.

“Their habitat is going to give. You’re going to have significant erosion occurring on river systems. You’re probably going to get an increase prevalence of disease outbreaks in these specific animal populations because more animals, higher density on the landscape, means easier transmission of things that are moving through the population at the time.”

Hunters and shooters in Spain are lobbying the government. Robbie says that the fieldsports community is starting to rattle the cages. He says: “They’re starting to say this isn’t acceptable, especially the situation that has just occurred in Cabaneros, which is 41,000 hectares, about 149 square miles. We know that the population is overpopulated now.”

Blood Origins believes there’s an important message for the anti-hunting lobby, which successfully persuaded the Spanish Government to bring in the new rules. He says: “When you ask for bans to be put in place, there’s going to be a consequence because of a management tool has been removed. Wildlife needs to be managed in some sort of fashion. If hunters and hunting organisations aren’t allowed to manage wildlife, something is going to manage wildlife. And unfortunately, most times that’s Mother Nature. And Mother Nature is not as ethical as a hunter could be.”

Feel free to share this story with the these buttons

Was that story useful?
Please support our work. Fieldsports Nation is the collective name for members of the countrysports community who have banded together to support our work promoting hunting, shooting and fishing.
We make an impact by funding a movement that informs the public and government policies.
Please click here.