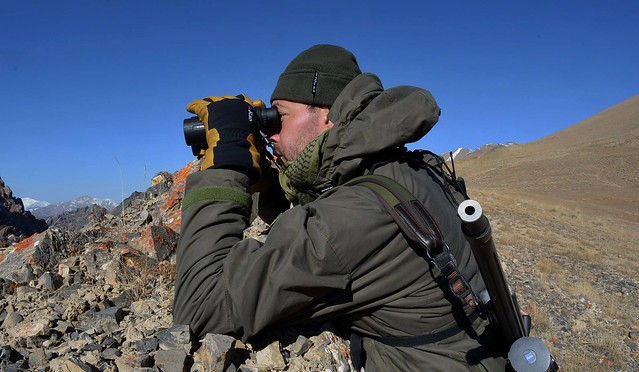 The UK government has widened out its ‘trophy hunting’ consultation to include UK deer. It looks like Boris Johnson now plans to stop overseas stalkers from coming to the UK, as well as Britons going overseas to hunt. A spokesman for UK environment department DEFRA confirms that the new consultation will include deerstalking in the […]

Tim Pilbeam is off to sample farm pest control jobs in Argentina – stalking axis deer and lamping hares. When you run a farm in the tropics, there’s a huge weight of wildlife that wants to munch your pasture and your crops – and the heat doesn’t make it any easier. Accompanied by Carlos, Tim […]

Andy Crow loves his clay shooting and he loves his game shooting, so what better way to spend a spring day than combining the two. He is off to Shropshire for a sim clay day, in the company of friends including Brody Woollard. This kind of shooting is all about technique, as Brody and Crow […]

South American wildlife – it’s all just a little bit different, requires new skills – and Tim Pilbeam is the man with the Rucksack & Rifle. He is out on a farm in Argentina, with the mission of culling some of the axis deer and hares that are eating their way through the local pasture. […]

Scottish gamekeepers are promoting their ‘Heath on Fire OK!’ campaign. Backed by sporting estates and gamekeepers across the country, the initiative raises awareness of why Scotland’s heather-clad hills are burning, demonstrating how muirburn – the controlled burning of heather – protects habitat and bird species. Muirburn largely takes place in the spring and often raises […]

A YouTube star who gave up veganism after claiming the diet made him sick says he would now hunt animals Tim Shieff, 31, from London told presenters on ITV’s This Morning show that his vegan diet made him ill. The YouTuber, a world champion freerunner and winner of the Ninja Warrior TV show, who was […]

Gamekeepers are good for mountain hares

Bad news for Chris Packham – mountain hares thrive on grousemoors, says new research. Mountain hares are regularly shot on Scottish moorland managed for grouse-shooting. However, concerns that large-scale culls of mountain hares on grouse moors are contributing to population declines are unfounded. The researchers from the Game & Wildlife Conservation Trust found that hare […]

The moose and its close relation, the European elk, range across the tundra and subarctic of the northern hemisphere, with several subspecies. Occasionally, a hunter shoots a record moose and – just declared – a 52-year-old hunter from the US state of Washington has set a world record for Shiras moose. Shiras is one of […]

Three convicted rhino poachers have been sentenced to 25 years imprisonment each. The judge in the Makhanda (Grahamstown) High Court in South Africa handed down the sentences to 40-year-old Forget Ndlovu, 38-year-old Jabulani Ndlovu and 37-year-old Skhumbuzo Ndlovu (pictured). They faced more than 50 charges related to the poaching of 13 rhinos across the Eastern […]

Obstruction of hunting is now an offence in France. A new measure passed on 11 April 2019 by the French Senate says that hindering or preventing a hunting party now leads to one year in prison and a 30,000 euro fine. Before this law, police issued tickets to offenders. For the past year, French hunts […]

A Freedom of Information request from the Countryside Alliance has discovered the recent petition to ban pheasant shooting on Welsh public land was manipulated by people outside of Wales, resulting in a direct impact on Welsh Government policy decisions. Of 12,706 signatures, only 1,487 had Welsh postcodes, with a staggering 88.3% of the total signatures […]

Ilic Igor from Serval Channel accidentally shot an Iraqi through both legs in Croatia. He was out shooting wild boar and jackals at night with night vision or thermal. He shot a jackal at around 2.30am on 2 April 2019 with a .300 Win Mag. The bullet passed through the animal and hit a man […]